The Art Of Possibility

Two teachers visit the principal’s office to get their new class assignment for the school year. The principal assigns them each to a class of new students. Both teachers don’t speak a word of the student’s mother tongue. The students don’t speak even one word of English.

The principal explains to the first teacher, “This class of students is full of students who aren’t the brightest lightbulbs in the bunch. They are dull, slow, lazy. Go do your best and I want them speaking some English after a few months.” The teacher heads off down the hall to the new class.

The principal explains to the second teacher, “This class of students is bright, each one a genius. They are energetic, eager, hard-working. Go do your best and I want them speaking some English after a few months.”

A few months later the principal visits both classes. He enters the first class and starts a conversation in English. The students look at him as if he were from Mars. Nobody understands a thing, not a student responds. They cry out in their own language how difficult English is, how discouraged they are, how they don’t want to take English anymore.

The principal enters the second class. He is greeted with “How are you?” and “What’s up?”. He has an engaging conversation in English with the class and they explain how excited they are about making new English friends and reading stories in English.

Facts of the story: Both classes had equally capable, intelligent students. The principal had lied.

The moral of the story? Your expectations of who your students are – what they can do – is EVERYTHING. See the research about expectancy results.
…………………………………………..

Let’s all begin the school year with our cups half full!

My own growth in this area has been very much influenced by Carl Rogers and especially his: On Becoming A Person. A fine work based on these same principles of possibility.

Many people who read my blog probably don't know that I'm a poet and have been writing poetry for over 4 decades. It's… 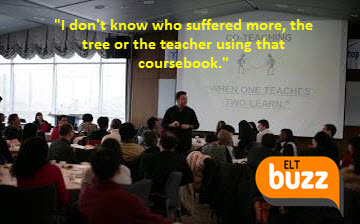 The 4th Estate (In Education)

Like so many, so many, I've been perturbed by where our media culture is headed. There seems to no longer be any "4th…